Skip to content
FacebookInstagram
Check out our current Featured Farm

The Story behind the Cambridge Cheese Company begins with the family; the Chamberlains. Courtney and Justin Chamberlain are both graduates of Onsted High School and attended separate Universities. While home for a summer, Justin had a chance encounter with Courtney at a local ice cream parlor. From that day on, they have been inseparable.

Courtney and Justin married in 2005 and by 2015 had lived in three different states with eight different addresses. During their stay in the State of New York, Justin and Courtney discovered cheese curd. Through a mere impulse purchase at a gas station in Ogdensburg, New York, Justin became hooked on the salty treat. It wasn't long before he was having to buy bags of the snack food and eventually hiding it from their four children. Family and Friends who visited the Chamberlains began to enjoy cheese curds and even purchased New York curds to bring back to Michigan.

Before long, Justin and Courtney began to experiment with home cheese making. One day, Justin mentioned to Courtney that in the event they ever returned to Michigan that they should start a small creamery and provide fresh cheese curd to Lenawee County. By this time, Courtney was very familiar with her husbands grandiose ideas and unwittingly agreed.

In December 2013 the Chamberlains received the opportunity to move back to Michigan. After a year in the Great Lakes State Justin decided to approach his wife and attempt to convince her that this was the right time to look into starting their own creamery. The Chamberlains consulted a friend in upstate New York who owned a small creamery and devised a plan to open one of their own. The Chamberlains decided to approach local small business administrations in Lenawee and Washtenaw Counties. Through their assistance, The Chamberlains laid the ground work for the Cambridge Cheese Company uniquely named after the location of the plant; Cambridge Township Michigan. 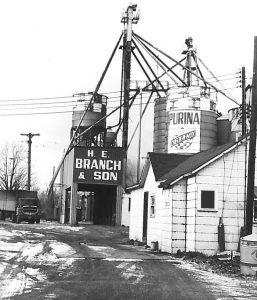 In July of 2016 The Chamberlains began construction at a local Onsted grain mill. The mill was retired several decades prior and was the perfect backdrop to their hometown business. Construction lasted five months. The entire building was renovated in some way shape or form. A state of the art cheese room was created and outfitted with a custom built cheese vat from Holland. A bulk milk tank was added and the entire room was outfitted to be washed from ceiling to floor. By November of 2016, Cambridge Cheese Company had secured a cheese plant license (Plant # 26-257) from the Michigan Department of Agricultural and Rural Development (MDARD). The family maintains the plant with the help of family and friends. Manufacturing is shared by everyone including the children, who work part time and assist with cleaning and packaging. The Chamberlains believe in a strong work ethic for themselves and their children. On occasion a customer may stop by the plant and meet a member of the Cambridge Cheese family. The customer is always greeted and sometimes gets an impromptu tour of the plant.

Cambridge Cheese Company opened in December of 2016. The Chamberlains have done exactly what they set out to do; provide the local area with fresh cheese curd.