The Bakerlads Farm is located on Cadmus Road, in Clayton Michigan. Bakerlads Farm is owned and operated by brothers, Blaine and Kim Baker. It is a fifth-generation dairy farm reaching back 135 years. Cambridge Cheese Company had the privilege of sitting down with Blaine Baker and discussing the farm and the dairy industry. Bakerlads Dairy Farm started like many dairy farms as a small operation with the early Bakers milking roughly four dairy cows. The farm gradually grew and now, Blaine and his brother, Kim, currently milk about 550 cows. Bakerlads utilizes a familiar breed of cow, the Holstein.

The cows are kept inside two large, free stall barns allowing the cows to walk around freely within their designated areas.

Connecting the two free stall barns is a covered walk-way that acts as a hallway to transfer the cows from the barns to the milking parlor located near the front of the farm. The cows have access to water through an abundance of water crocks located throughout the barn. The Bakerlads Farm uses cold water to help cool fresh milk from the milking parlor. That water then gets sent throughout the barns to the water crocks which operate on a float system. When the water reaches a certain level, the crocks automatically fill.

There is very little water waste with this system. Fans hanging from the barns allows Bakerlads to keep the cows cool and comfortable. Many of the Cambridge Cheese Company customers may not know but barn design is as important as what is placed inside the barn. Blaine filled us in on the purpose of the open design for the barns. For starters, the sides of the barns are open with the option of rolling down a waterproof shell. During the winter months or during inclement weather, Blaine can button the barn up to keep the cows more comfortable. The second noticeable design of the barns are the ends. The ends are also open. This allows Blaine to move manure out of the barn but also assist with air flow throughout the barn contributing to cow comfort. 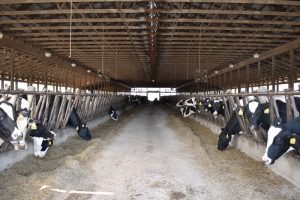 Air flow is very important when there are large amounts of animals in an area. If the cows don’t have sufficient airflow they may overheat causing them to drop in milk production. There are other factors that contribute to a drop-in milk production. If the cows are cramped or uncomfortable due to the size of their enclosure they may become stressed and produce less milk. Cows need a dry, comfortable place to lay down and at Bakerlads Farm the cows are routinely bedded with clean, dry sand. The sand provides the cows with a soft place to lay and is resistant to certain types of bacteria due to the lack of organic material. Studies are still inconclusive, however the long- term data leans towards sand bedding as the cause for lower incidents of mastitis. For those who may not know, mastitis is an inflammation of the mammary gland in a cow’s udder. Mastitis leads to a cow being segregated from the daily milk schedule. Dairymen who consistently have mastitis will have a significant drop in consumable milk production.

Bakerlads Farm has a huge job when it comes to maintaining the health of 550 cows. One of the most important factors, aside from cow comfort is cow nutrition. For most of Americans, what and how much a cow eats never crosses our mind. I can tell you that most dairymen spend a significant amount of time and money on what, when and how much to feed their herds. Most dairy farms have at least a part time cow nutritionist that knows the herd and works with the farmers to tailor a diet specific to their herds. Imagine your own private dietician that prepares your food daily. Bakerlads Farm carefully measures a mixture of corn silage, hayage, minerals and shelled corn to feed their herd twice daily. Each Holstein cow consumes approximately 105 pounds of feed per day. Blaine keeps everything organized with the use of his computer. With a key stroke, Blaine can change the feed to better support the herd. All the corn silage is grown on the farm. To point a fact, the Bakerlads Farm works approximately 2,200 acres. Of the 2,200 acres, 300 acres is alfalfa, 300 acres is corn that is chopped while it is still green, and 550 acres is corn that is shelled. The remaining acres is used to grow soy beans which the Bakerlads Farm uses as a cash crop.

The heart and soul of a dairy farm is the milking parlor and Bakerlads Farm is no exception.

he parlor was recently renovated and went from a double 8 setup to a double 14 setup. This setup allowed Bakerlads to increase their milking capacity from 16 cows to 28 cows at one time. The parlor is roomy and well lit. A little fact that a lot of people don’t know is that parlors are usually quite peaceful during milking. The cows are very use to being walked to the parlor and know exactly what to do. The cows usually load themselves into their respective chutes as a large gate closes in front of the cows until they are done. Once the milkers auto-release, the chutes open and the cow walks back to her barn. The Bakerlads Farm has the capacity to store 5,000 gallons (43,000 lbs) in one bulk tank and an additional 2,500 gallons (21,500 lbs) in a second tank. Bakerlads Farm requires a milk pick-up every day to keep running at peak capacity.

One universal fact is that dairy farms have to have calves in order to continue to produce milk and to maintain the herd. Bakerlads Farms has a calf born everyday, rain snow or shine. There are some dairy terms that most people might not be aware of. First, A female animal that has yet to give birth to a calf is called a heifer.

A heifer can be bred around 22 months. The gestational period of a heifer is the same as a human, at 9 months. When a heifer gives birth to a calf she is considered a cow. Once the heifer gives birth she will feed the calf with the new milk, which contains important nutrients, such as colostrum, which the new calf needs to be healthy. Male calves, or bulls, are sold, Female calves, or heifers are taken off site to be raised and then introduced back onto the farm where they will assume their role in the herd. Without a steady influx of breeding back and having calves a farm like Bakerlads would not be able to continue business. Bakerlads Farm takes great care in the care of their heifers and cows. All the heifers and cows are artificially inseminated. Once the heifer/ cow is bred they wait 28-35 days before performing an ultra sound. If the heifer/ cow shows signs of being pregnant they wait an additional 60 days for a second ultra sound. The second ultra sound ensures there hasn’t been a miscarriage and that the calf is developing properly.

In addition to being awarded for their ecological stewardship, Bakerlads Farm has opened their farm up to Michigan State University for various agricultural

As consumers we have lost touch with our food. Throughout our busy lives we drive to a big box store, run inside, and pluck items off the shelf based on a variety of reasons with little to no thought as to where the product was made or how it got to the store. Without these farmers working tirelessly to provide a nutritional product, we would lack a variety of different components important to a healthy diet such as cheese, yogurt, butter and milk.